This MotionEye model is an indoor/outdoor dual detection camera which uses both video and infrared sensor to achieve motion detection and PIR functionality, reducing false alarms and ensuring the accuracy and effectiveness of real-time alarm information. Built-in PIR and coax alarm output makes the camera an ideal choice for applications which require video verification of intrusion alarms, such as courtyards, offices, warehouses, stores, etc.

his PIR model is an indoor/outdoor dual detection camera which uses both video and infrared sensor to achieve accurate motion detection functionality. It also supports active deterrence feature which warns off intruders with white light even before users are aware of the incident. This camera is an ideal choice for applications which require intrusion protect and video verification, such as courtyards, offices, warehouses, stores, etc. HDCVI technology supports 4 signals to be transmitted over 1 coaxial cable simultaneously, i.e. video, audio*, data and power. Dual-way data transmission allows the HDCVI camera to interact with the HCVR, such as sending control signal or triggering alarm. Moreover, HDCVI technology supports PoC for construction flexibility. HDCVI technology guarantees real-time transmission at long distance without any loss. It supports up to 700m transmission for 5MP HD video via coaxial cable, and up to 300m via UTP cable. HDCVI technology inherits the born feature of simplicity from traditional analog surveillance system, making itself a best choice for investment protection. HDCVI system can seamlessly upgrade the traditional analog system without replacing existing coaxial cabling. The plug and play approach enables full HD video surveillance without the hassle of configuring a network. The detection accuracy is well guaranteed with both motion detection and PIR detection, which can eliminate the number of false alarms you receive. With the advantage of dual detection technology, your HDD will now last longer and not be recorded with false alarms. Gone are the days of alarms caused by heavy wind or rain. Instead, only true threats will instantly trigger an alarm and allow you to protect your loved ones. Active deterrence is to warn off intruders actively with white light even before users are aware of the incidence. Once an intrusion is detected, the white light will turn on to alert the intruder. The white light can be set to Normally on or Flash. The camera is designed with array LED IR illumination for best lowlight performance. Smart IR is a technology to ensure brightness uniformity in B/W image under low illumination. Dahua’s unique Smart IR adjusts to the intensity of camera’s infrared LEDs to compensate for the distance of an object, and prevents IR LEDs from overexposing images as the object come closer to the camera. Audio information is used as supplementary evidence in video surveillance applications. The HDCVI camera supports audio signal transmission over coaxial cable. In addition, it adopts unique audio processing and transmission technology that best restores source audio and eliminates noise, guaranteeing the quality and effectiveness of collected audio information. The camera’s outstanding reliability is unsurpassed due to its rugged design. The camera is protected against water and dust with IP67, making it suitable for indoor or outdoor environments. With PIR working temperature range of -10 °C to +50 °C (14 °F to +122 °F), the MotionEye is designed for extreme temperature environments. Supporting ±30% input voltage tolerance, this camera suits even the most unstable power supply conditions. Its 4KV lightning rating provides protection against the camera and its structure from the effects of lightning 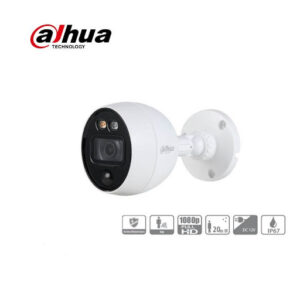