Access control is a fundamental concept in security that minimizes risk to the business or organization. This system is a safeguard for selective restriction of access to a place or other resource while access management describes the process. The act of accessing may mean consuming, entering, or using.

·        An access-controlled entry, such as a door, turnstile, parking gate, elevator, or other physical barrier

·        A reader installed near the entry. (In cases where the exit is also controlled, a second reader is used on the opposite side of the entry.)

·        Locking hardware, such as electric door strikes and electromagnetic locks

·        Request-to-exit (REX) devices for allowing egress. When a REX button is pushed, or the motion detector detects motion at the door, the door alarm is temporarily ignored while the door is opened. Exiting a door without having to electrically unlock the door is called mechanical free egress. This is an important safety feature. In cases where the lock must be electrically unlocked on exit, the request-to-exit device also unlocks the door.

Access control decisions are made by comparing the credentials to an access control list. This look-up can be done by a host or server, by an access control panel, or by a reader. The development of access control systems has observed a steady push of the look-up out from a central host to the edge of the system, or the reader. The look-up and control functions are by the control panel. The spokes communicate through a serial connection; usually RS-485. Some manufactures are pushing the decision making to the edge by placing a controller at the door. The controllers are IP enabled, and connect to a host and database using standard networks. 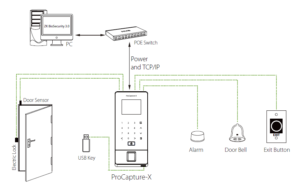